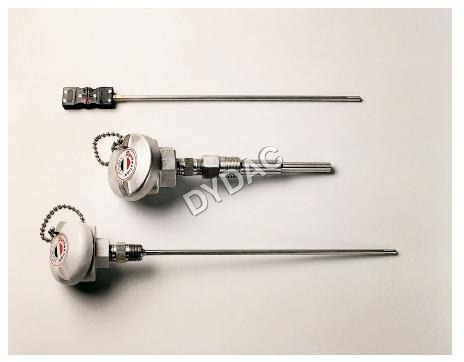 Share Your Product:
Request To Call Back Send Inquiry
X

We are efficiently meeting the requirements of numerous customers across the nation by manufacturing and supplying a wide range of Temperature Sensors. These sensors are used to measure the temperature accurately. We use finest quality materials, sourced from the most authentic vendors to manufacture the sensors. Available in different models and specifications, our Temperature Sensors are tested on certain quality parameters to offer a defect free range to the clients.

Which Sensor, Thermistor, RTD or Thermocouple?

The concept of temperature

From a physical point of view, heat is a measure of the energy contained in a body due to the irregular motion of its molecules or atoms. Just as a tennis ball possesses more energy with increasing speed, so the internal energy of a body or gas increases with increasing temperature. Temperature is a variable which together with other parameters such as mass and specific heat describes the energy content of a body.

The basic measure of temperature is the degree Kelvin. At 0?K(elvin) the molecules of every body are at rest and it no longer has any thermal energy. There is therefore no possibility of negative temperatures since there cannot be a state of lower energy.

In every-day use it is general practice to use the Celsius scale (previously Centigrade). Its zero is placed at the solidification point of water since this point is very simple to reproduce in practice. Now 0?C is by no means the lowest possible temperature as everyone knows from experience. By extending the Celsius scale to the lowest possible temperature where all molecular movement ceases we reach a temperature of -273.15 degrees.

Man has the ability to measure temperatures through his senses within a limited range. However, he is incapable of accurate reproduction of quantitative measurements. The first forms of quantitative temperature measurement were developed at the beginning of the 17th century in Florence and depended on the expansion of alcohol. The scaling was based on the maximum summer and winter temperatures. A hundred years later the Swedish astronomer Celsius replaced this by a scale based on the melting and boiling points of water. This offered the opportunity for a thermometer to be scaled at any time and reproduce readings at a later time.

The measurement of temperature is important in many applications, such as, building control, food processing and the manufacture of steel and petrochemicals. These very different applications require temperature sensors of different physical construction and often different technology.

In industrial and commercial applications the measurement point is frequently far away from the indication or control point. Often there is a requirement for further processing of the measurement in controllers, recorders or computers. Such applications are unsuitable for direct-indicating thermometers as we know them from every-day use but require devices which convert temperature into another form, an electrical signal. To provide this remote electrical signal it is common practice to employ RTD?s. thermistors and thermocouples.

RTD?s are the most accurate sensors for industrial applications and also offer the best long-term stability. A representative value for the accuracy of a platinum resistance is +0.5 percent of the measured temperature. After one year there may be a shift of +0.05?C through aging. Platinum resistance thermometers can cover temperature ranges from -200 to 800?C.

The variation of resistance with temperature

The electrical conductivity of a metal depends on the mobility of the conduction electrons. If a voltage is applied to the ends of a metal wire the electrons move to the positive pole. Faults in the crystal lattice interfere with this movement. They include foreign or missing lattice atoms, grain boundaries, and atoms on interlattice positions. Since these fault positions are independent of temperature they produce a constant resistance. With rising temperature the atoms of the metal lattice exhibit increasing oscillations about their rest positions and thereby impede the movement of the conduction electrons. Since this oscillation increases linearly with temperature, the resistance increase caused by it depends as a first approximation directly on the temperature.

In industrial measurement the resistance material platinum has found general acceptance. Its advantages include chemical stability, comparatively easy fabrication (especially for wire manufacture), the possibility of obtaining it in highly pure form, and electrical properties which can be reproduced. These characteristics have made the platinum resistance sensor the most universally interchangeable temperature sensor.

Thermistors are made from certain metal oxides whose resistance decreases with increasing temperature. Because the resistance characteristic falls off with increasing temperature they are called negative temperature coefficient (NTC) sensors.
Due to the nature of the basic process the number of conducting electrons increases exponentially with temperature; the characteristic therefore exhibits a strongly rising form. This pronounced non-linearity is a disadvantage of NTC resistors and limits their useful temperature span to about 100?C. They can of course be linearised by an automation computer. However, accuracy and linearity generally do not meet the requirements over larger measurement spans. Their drift under alternating temperatures is also larger than for RTD?s. Their field of use is limited to monitoring and indicating applications where the temperatures do not exceed 200?C. In such simple applications they are actually preferable to more expensive thermocouples and RTD?s in view of their low cost and the comparatively simple electronic circuitry required. In addition they can be produced in very small designs with a fast response and low thermal mass.

Thermocouples are based on the effect that the junction between two different metals produces a voltage which increases with temperature. Compared with resistance thermometers they offer the clear advantage of a higher upper temperature limit, up to several thousand degrees Celsius. Their long-term stability is somewhat worse (a few degrees after one year), the measuring accuracy is slightly poorer (on the average +0.75% of the measurement range). They are frequently used in ovens, furnaces, flue gas measurements and other areas with temperatures above about 250?C.

When two metals are connected together, a thermoelectric voltage is produced due to the different binding energies of the electrons to the metal ions. This voltage depends on the metals themselves, and in addition on the temperature. In order for this thermal voltage to produce a flow of current the two metals must of course be also connected together at the other end so that a closed circuit is formed. In this way a thermal voltage is produced at the second junction. The thermoelectric effect was discovered in 1822 by Seebeck, and as early as 1828 Becquerel recommended the use of a platinum-palladium thermocouple for temperature measurement.

The voltage produced by the thermoelectric effect is very small and amounts to only a few microvolts per degree Celsius. Thermocouples are therefore not generally used within the range -30 to +50?C since the difference from the reference junction temperature is too small here to produce an interference-free signal.

In the resistance thermometer the electrical resistance varies with temperature. For evaluating the output signal a constant current is passed through it and the voltage drop across it is measured. For this voltage drop follows Ohm's Law, V=IR.

The measuring current should be selected to be as small as possible in order to avoid heating of the sensor. It can be taken that a measuring current of 1 mA does not introduce any appreciable errors. This current produces a voltage drop of 0.1 V in a Pt 100 at 0?C. This signal voltage must now be transmitted through the connecting cables to the indicating or evaluation point with a minimum of alteration. There are four different types of connecting circuit:

2-wire circuit
The connection between the thermometer and the evaluation electronics is made with a 2 conductor cable. Like any other electrical conductor this cable has an electrical resistance which is placed in series with the resistance thermometer. The two resistances are therefore added together which is interpreted by the electronics as an increased temperature. With longer distances the line resistance may amount to a few Ohms and produces an appreciable shift in the measured value.

3-wire circuit
In order to minimize the effects of the line resistances and their fluctuation with temperature it is usual practice to employ a three-wire circuit. It consists of running an additional wire to one contact of the RTD. This results in two measuring circuits of which one is used as reference. The 3-wire circuit makes it possible to compensate for the line resistance both in its amount and also in its temperature variation. It is however a requirement that all three conductors have identical properties and are exposed to identical temperatures. This usually applies to a sufficient degree so that the 3-wire circuit is the most widely used method today. No line balancing is required.

4-wire circuit
The optimum form of connection for resistance thermometers is the 4-wire circuit. The measurement depends neither on the line resistances nor on their variations due to temperature. No line balancing is required. The thermometer is supplied with the measuring current through the supply connections. The voltage drop across the measurement resistance is picked off by the measurement lines. If the input resistance of the electronics is many times greater than the line resistance, the latter can be neglected. The voltage drop determined in this way is then independent of the properties of the connecting wires. This technique is usually only used in scientific apparatus requiring accuracies measured in hundredths of a degree.

2-wire transmitters
The problems of the 2-wire circuit as described above can be avoided without the use of a multiconductor cable by employing a 2-wire transmitter. The transmitter converts the sensor signal into a normalized current signal of 4 - 20 mA which is proportional to temperature. The supply to the transmitter is also run through the same two connections, using a base current of 4 mA. The 2-wire transmitter offers the additional advantage that the amplification of the signal greatly reduces the effects of external interference. There are two arrangements for positioning the transmitter. Since the distance for the unamplified signal should be kept as short as possible the amplifier can be mounted directly on the thermometer inside its terminal head. This optimum solution is some times impossible for constructional reasons or the consideration that the transmitter may be difficult to reach in case of a fault. In such situations a rail mount transmitter is mounted inside the control cabinet. The advantage of improved access is bought at the expense of the longer distance over which the unamplified signal has to travel.

Thermistor Wiring
The resistance of thermistors is is normally several orders of magnitude greater than any lead resistance. The lead resistance therefore, has a negligible effect on the temperature reading and thermistors are almost always connected in a 2-wire configuration.

Thank You for your valuable time. We have received your details and will get back to you shortly.

×
Get a price quote for Temperature Sensors
×